Kimmy, Jebediah, and Orlas return from the KSS!  They rest up, and get ready for flights beyond Kerbin!

“That was a long time in space!  What great training!” Jebediah and rookie Orlas are chosen to take Discovery 3 and its payload for Spacelab 2 to orbit! After the first stage ejects, the fairings protecting the new space station eject, revealing the whole craft.

Looks a lot like those drawings we have for a deep space vehicle!

After some tricking maneuvering, Discovery 3 rendezvous with Spacelab!

Discovery 3 moves in closer and closer…

Once in range, Orlas exits the command pod of Discovery 2…

While Bill exits the old Spacelab!  The two give each other a ‘high five’ as they pass, switching seats in space!  Orlas will be the first new crew on Spacelab 2, and Bill will return with Jeb to the surface.

See you soon Orlas!  We’ll be in touch!

As upgrades are started on several Space Center facilities, funds are running very tight until the next funding period.  To stay busy, Mission Control decides to send Jeb on a short mission to investigate an anomaly detected by the Radar Scanner on board SpaceLab!

“Hey – before I take off I’m going to go check out that strange thing near the Space Center!”

Jeb hops out of the X-4 Jetplane, and runs over to the strange object….. Whew!  This is quite the jog! Look at the size of this thing!   KSEA scientists are dispatched to investigate.  Jeb returns to his plane! Jeb flies west, to the mountains near KSC…

Boom!  The X-4 flips and flies apart in an explosion of parts! “Looks like another Monolith!  Strange… dirt around it would indicate it may have recently been dug up.  Very odd!”
-Jeb

Jeb is rescued, and the flight data from the X-4 is examined.  Any future X-4 flights have been grounded until the cause of the crash can be determined!

Discovery 2 returns from Minmus! Jebediah and Bob are both exhausted from the journey, but report being in good health!

The Discovery 2 pod sets down in the deserts, west of the KSC. Jeb closes the orbit  of Discovery 1 to a very close 20km.

Bob hops out and starts running the planned experiments!

The next phase is even more exciting!   Jeb adjusts the orbit so that the Discovery 1 will get very close to the surface of Minmus.   How close?  Almost 8000 meters!

Jeb maneuvers  Discovery to a nice, low pass of Minmus.

“I’m going a little ways out from the ship to get a good look!”

After calming down Bob returns to Discovery 1, and the crew waits for their scheduled return!

Discovery 1 arrives at Minmus!  Jeb and Bob transmit pictures back from the cockpit.

“It looks… minty!” Bob says.  After a bit of maneuvering, Discovery is put into a high orbit of Minmus.  “Time to get a little closer!” Jeb says.

The Discovery 1 rocket is rolled out to the launchpad – Jebediah will be piloting, with rookie space-scientist Bob on board to assist with research.  This will be Bob’s first mission in space!

Another first for the mission is the first Mission Patch! Symbolizing the adventure from Kerbin to Minus, and promising a future trip to Mun!

“Uh – so this is just the training simulator?  Right?”  -Bob Not so much, Bob!  Discovery 1 lifts off! After achieving orbit, Jeb aligns Discovery’s orbit to that of Minmus.  Then, after a short wait, Discovery 1 burns to Minmus! The trip will be just 6 days – all of Kerbin waits! After 25 (25!) days in space traveling to Minmus and back, Jebediah returns to Kerbin!

The Horizon Crew Pod ejects from the vessel, and Jeb steers the craft home! What a great landing!  Jeb is welcomed home to cheers!  “Where to next?” he asks!

After 18 days in space Jebediah arrives at Minmus!

“It looks so far away still – but it’s amazing to see it this close!  I can’t wait to go back!” Jeb says.  Horizon 10 flies back to Kerbin. The return trip will be only 5 days! Horizion 10 will have an early, early morning launch.  “The lights on the towers make the rocket look awesome!” Jeb remarks. 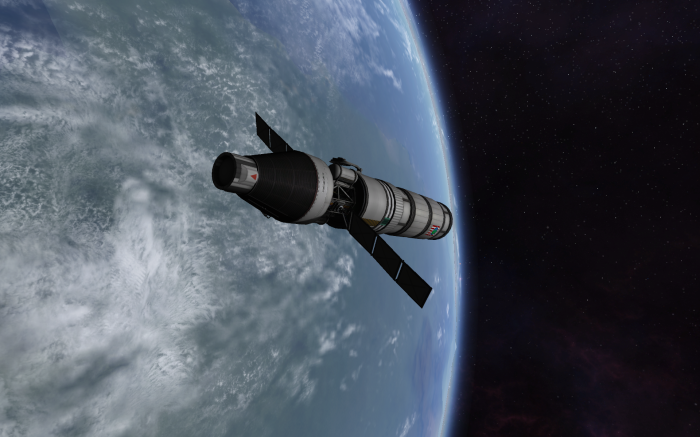 Horizion 10 takes off, and settles into orbit after some initial piloting difficulty.  “Dang… wasted some fuel there!  We’ll do the math in orbit and see if I can still make it to Minmus!” Jeb says.  Fuel is tight on this mission.. so everyone is a bit nervous! 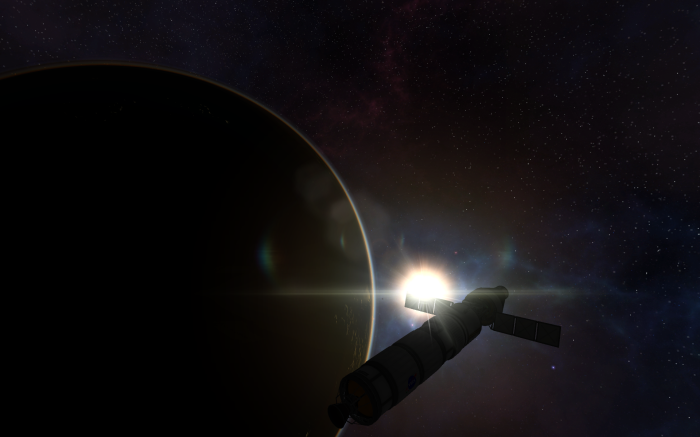 Thankfully it looks like there’s enough fuel in the craft to make it to Minmus and back using a free return trajectory.  The burn is a success!  Now the REAL test… the long, long flight to Minmus.  Jeb says he’s prepared for it though!  Good luck Jeb!