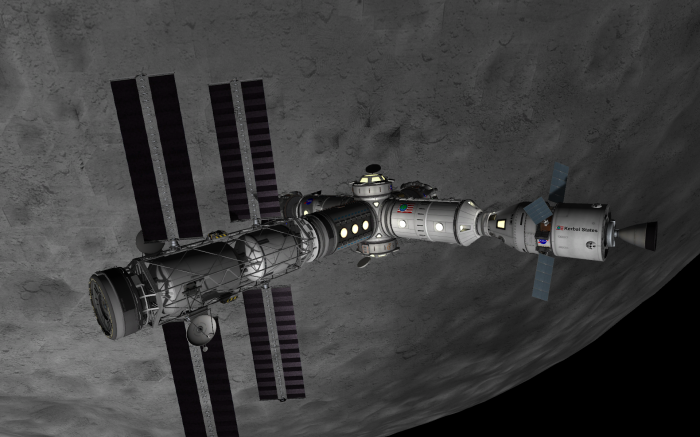 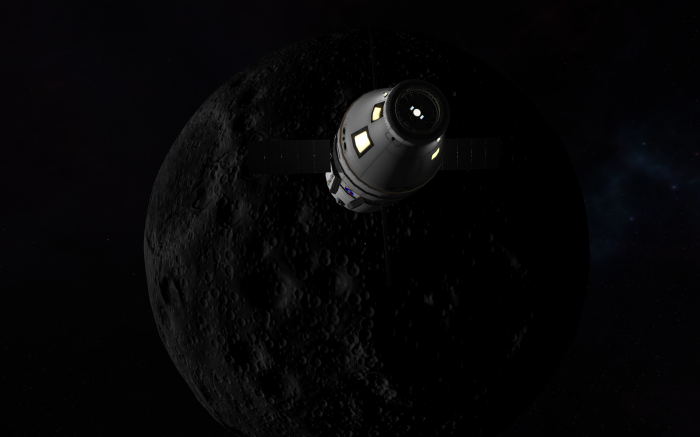 Malcolm fires the ACV’s engine, and the crew are on a return to Kerbin! 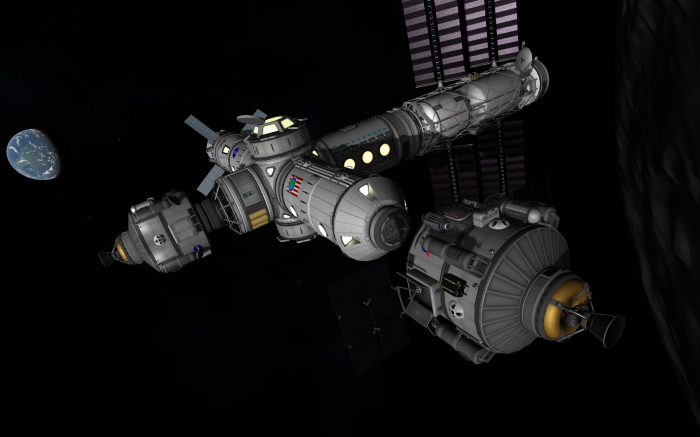 Mirphe and Maclolm finish checking the Aurora Mun Lander at Unity Space Station… it checks out!  (The lander was last used by the Aurora 16 mission, on Year 4 Day 360.) Mission Command has cleared them for a landing at the Munar Lowlands, so they’re off! 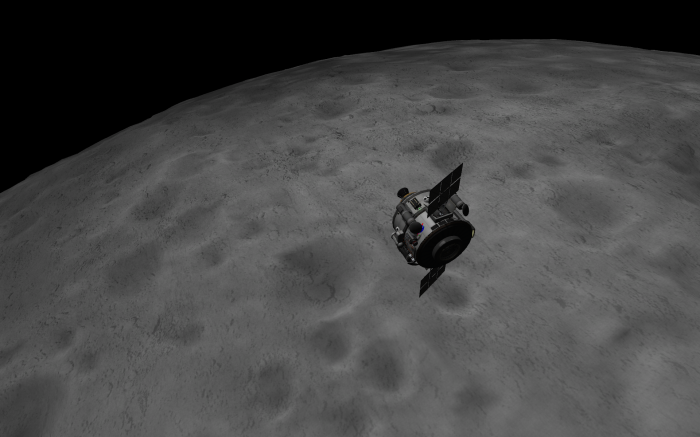 “Coordinates are mapped – heading down!”

The lander touches down!

“What an unexpected adventure!” 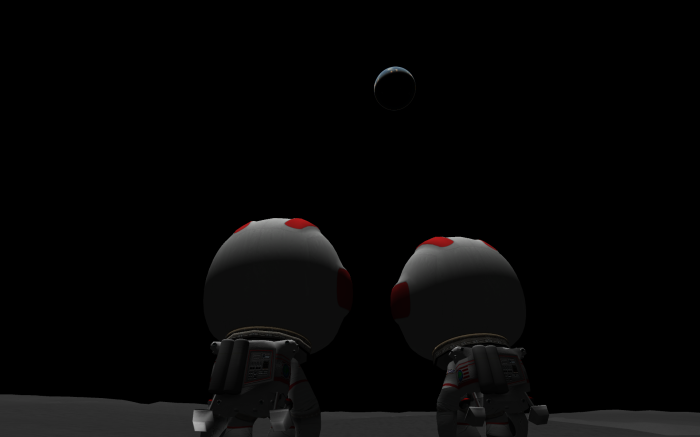 After taking some time to appreciate the view, Mirphe and Malcolm climb back into the lander…  and take off!

“These old Aurora Landers don’t have much for life support, we better get back to the station!”

… and docks!  The crew will remain on the station for a few days, then return to Kerbin!

“Ok, rendevous manuevers complete!  Looks like I just need to switch on the RCS system to get in nice and close… <<audible “CLICK!”>> … uh oh.  KSC… I think we have a problem!”

Instead of switching on the RCS system, Malcolm accidentally engages the staging switch that disconnects the command pod!

Ok… Don’t panic Malcolm!  Just need to get over to Unity Space Station and wait for a rescue!  Hopefully they left some snacks on that thing…”

Malcolm boards Unity Station and starts rummaging for some food. Thankfully there’s enough oxygen on board to last a few weeks!  Meanwhile, The ACV drifts away from the station!

KSEA was already building another ACV, and now it looks like the mission is clear: Bring Malcolm home!

The Aurora 20 Mission to Unity Space Station (finally) comes to an end!  The Research Mission was intended to gather significant data on Mun and to study long-duration of spaceflight on Kerbal physiology. KSEA administrators stress that the length of the mission definitely did not mean that Mission Control forgot about the mission!

Luly, Seely, and Kerlorf climb into the Aurora Command Pod and leave the station!

“All those exciting missions to Duna doesn’t mean Mun doesn’t have something to offer you know!”

The return of the Aurora 20 mission will leave Unity Space Station uninhabited until the next crew arrives!

Luly and Kerlorf prepare to head down in the (very) delayed USS-LS03 landing!  Both the Farside crater and the Munar Canyons will be investigated!

The Unity Research Lander undocks, and heads down to the surface!

Luly watches as Kerlorf plants the flag at the Farside crater landing site!

“It’s time to head over to those canyons!”

Luly and Kerlorf land at the Munar Canyons and take readings – both are getting pretty exhausted, especially Luly!  A future Aurora mission is being planned to swap the crew out!

The lander heads back to orbit, then sets course for Unity Space Station!

“Fuel on this one is very, very tight.  I think future landings we should keep it to just one landing… no jumps!  This isn’t Minmus afterall!”

The next crew for the Unity Space Station is slated to be Robart and Gilian – both have experience landing on Minmus, but this will be their first time on Mun!

The KSS Resupply Vehicle has barely enough fuel to dock with Unity Space Station, but arrives nonetheless!  The automated vehicle starts transferring its stores of food and other supplies at once!  This should give Unity Space Station another 2 years of life!

Mission Control gives the “Go” for further mission operations, and the trip to the Munar Canyons should be ready in just days! 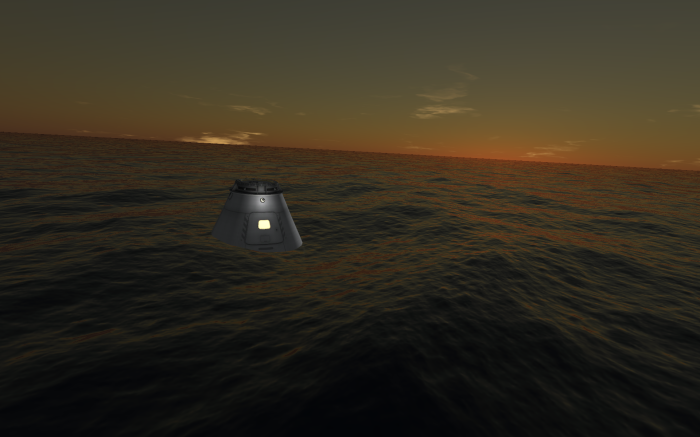 Aurora 16 splashes down, in the sea west of the Space Center!   Kimmy, Edan, and Dunwin are all rescued – and the vast trove of data gathered on both Harmony and Unity Space Stations is collected!

KSEA decides that it’s probably best to get Dunwin and Kimmy back to Kerbin to start their training for the Explorer 2 Mission to Duna!   Edan takes Aurora 16 and pilots it from Unity Space Station in orbit of Mun, to Minmus! Kerlorf, Seely, and Luly remain on the station to train!

This will be the first time a vehicle has traveled from one Space Station to the other!   The trip to Minmus will take 2 weeks!

The next landing for the research team at Unity Space Station is announced!  The landing will be at the far side crater, at site USSLS03-A.  From there, the somewhat more dangerous investigation of the Farside Canyons will be conducted.

Luly and Kerlorf will be the crew for this landing!

“Before we go back to the surface I need some time to rest!  We need to get more scientists up here!”

“Well, in the meantime we can ditch the Munar transfer stage… we’ve finally used up all its fuel! ” 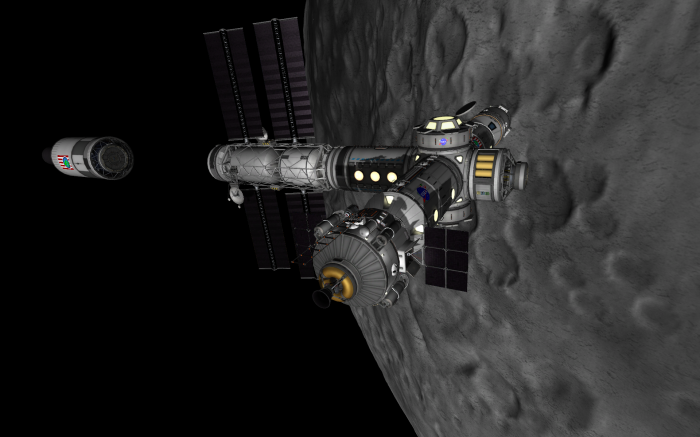 Mission Planners announce the first destinations of the Unity Space Station Science teams!   The first landing will be at USSLS01-A, in the Highlands.  Next, the lander will perform a short jump and land in the Southwest Crater.  From there, the lander will return to Unity Station and the next team will head down!

A scientist will be required for each landing, so Luly will get the most time on Mun! Tentatively, the crew rotation will be:

This should let all crew on the station get some experience!