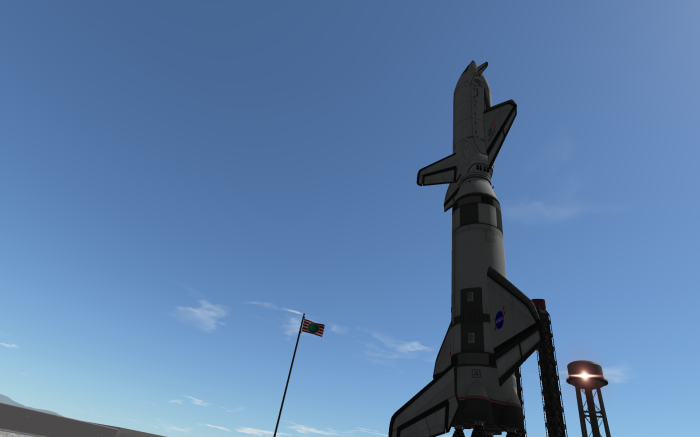 The Heavy Cargo Shuttle Resolute is ready for its first launch!  Since this is a prototype, and the vehicle doesn’t have a computer controlled navigation system, KSEA wants to be cautious and only launch one Kerbal.

Everyone at the Space Center is tense as the launch continues!   Resolute glides through its gravity turn, and moves to circularize!

The Launcher separates, and heads back down to Kerbin to get recovered!

“That was quite the kick!  Circularizing orbit now!”

Jeb begins burns to rendezvous with the Kerbin Space Station!

Success!  Once at the station, Resolute’s cargo doors open…

and the Docking Module leaves the shuttle – guided remotely!

The Docking module moves away from Resolute, toward the station…

Jeb pilots Resolute in to test out the new docking module!

“Yikes!  You get an idea of how big this Shuttle is when you get close to the Station!”

Everyone at the Space Center cheers!  Resolute takes a ride around Kerbin, docked to the Space Station. Jeb says hi to everyone – and prepares for the next, and probably most dangerous part of the mission… reentry and landing! 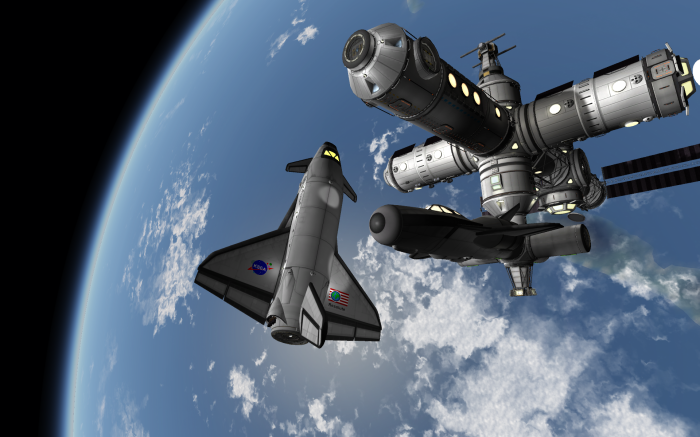 Then Resolute closes its cargo bays!

“Mission Control – this is Resolute!  I’m coming down!” Resolute heads through the atmosphere, then starts its approach to the Space Center!

Jeb poses in front of the Heavy Cargo Shuttle Resolute.  Well done – mission success!  Resolute will be brought in and refurbished for its next flight!