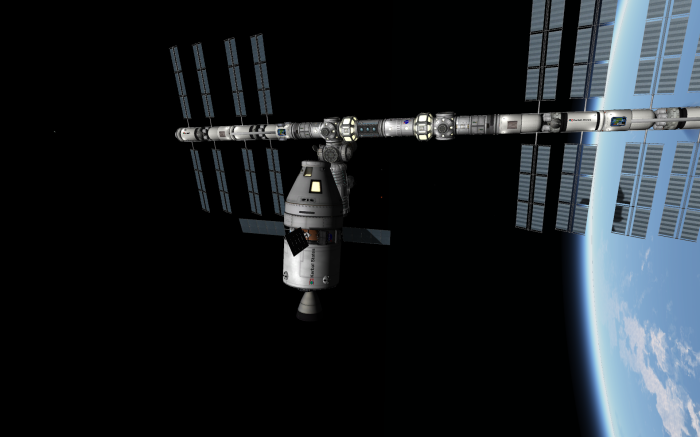 The Spaceport was launched Year 9, Day 186 by a Jool IV rocket. A Mk6 ACV carried Gillian and Shepely to the station as the first crew.

Year 9, Day 230 saw the second launch of the Spaceport, giving the station it’s mirror-image design with fuel tanks on the ends and the crew section in the middle of the station. After the second section was attached, Kerbin Spaceport took the record as the largest spacecraft in history – nearly as long as two Vehicle Assembly Buildings stacked on top of eachother!

Year 9, Day 2348 saw the launch of the science expansion to the Spaceport, which consisted of a science lab, a docking and cupola module, and a massive Cyclotron Particle Accelorator to study Kuarks!

Blueprint of the Kerbin Spaceport (Core Section.) The expansion of the station was nearly identical, and the blueprint team didn’t feel like making a duplicate.

ABOUT THE KERBIN SPACE STATION

The successor to Spacelab, the Kerbin Space Station, or “KSS” (itself originally called Spacelab 2) has become a major part of the Kerbal Space Exploration Administration’s mission. The station can theoretically hold a maximum of 30 Kerbals, however the standard crew compliment is 5.
KSS is the largest constructed object in space, and besides conducting orbital research allows for crews to train for the longer duration missions planned for the future!

On Year 3, Day 12 the Crew Shuttle was launched, and has become the new standard for crew rotation to the KSS.

INITIAL LAUNCH
The station core was originally launched Year 2, Day 110 as part of the Discovery 3 mission, which also rescued Bill from the original Spacelab. Orlas was the first Kerbal aboard the KSS (a fact he was so excited about that he had his hair died blue … for science!)

FIRST DOCKING WITH KSS
Orlas was later joined by scientists Kimmy and Glenica, who arrived on the first Aurora launch, piloted by Val on Year 2, Day 131.

FIRST KSS EXPANSION MODULE – THE CUPOLA
The first expansion to the KSS was the Cupola Module, which was launched on Year 2, Day 163. The installation was tricky, and Orlas had to personally EVA and pilot the module into place (especially impressive, as he’s not a pilot!)

A LABORATORY IN SPACE – THE SCIENCE MODULE
The module proved to be very popular both with the Kerbals on the station and back home. The next planned module is the Science Module, which will nearly double the size of the station, and provide a permanent Science Lab in space, as well as future expansion ports for the new larger, Cupola sized expansions that are now able to be launched! Debate is currently ongoing on whether to launch the next module on the reliable Discovery 3 platform, or to test out the new Sarnus 1!

The KSS Science Module was launched on Year 2, Day 180 on the Sarnus V rocket! The new addition doubled the size of the station, and provided future expansion for Kerbal’s “home in the sky”.

By the end of Year 2, both a command core that included docking ports, and a Science Core were launched, adding more cupolas and laboratory space.

The KSS Habitat Section was launched on Year 3, Day 156 as a both much needed personal space for the KSS crew, but to test the main crew component of Explorer, due to be launched by the end of the year!

In late Year 4, an Aurora Rocket carried a new docking and crew space to the KSS! This provided some excellent views of Kerbin combined with a better docking system for the station.